Book Review: A Brief History of Time by Stephen Hawking

Scientists may not be as exciting as they were in the early 20th century. In an era where the world is waffling in its commitment to natural sciences, it is reassuring to hear Stephen Hawking defend this esoteric field for its own sake. As the title implies, ‘A Brief History of Time’ is a succinct review of this challenging task, providing the reader with a summary of key cosmological ideas including multidimensional space, the inflationary universe, and the cosmic fates that explain the construction and potential destruction of the universe. He discusses two major theories, relativity, and quantum physics, that modern scientists use to describe the universe. Finally, he talks about the search for a unifying theory that coherently explains everything in the universe.

Stephen Hawking’s ‘A Brief History of Time’ is an attempt to clarify to laymen the laws of physics and their impact on the functioning of the universe. In the book, Hawking tries to explain dense and sophisticated theories in a way similar to a fireside chat with a scientist, such that someone without an advanced physics degree can understand. For most of the part, he’s successful. Given the variety of subjects that the book touches, I’d recommend this book to anyone curious about physics or to someone looking for something challenging to read. It’s one of a very few books in this category that maintained a continued interest despite the fact that a lot of its contents stretch the reader further than is usually expected in a book of this sort. I must admit, there were more than a few times when I was a little lost and unable to follow the thread of what Hawking was explaining. I believe, this had more to do with the concepts that Hawking brings up instead of a problem with his actual writing. In every chapter, came the point where my brain could not hold on to another permutation of a theory. Of all the books I’ve read in my life, this has to have the highest educational value per page.

I’ve seen lots of reviews of the book that say that the write-up is too highbrow for an average reader and some even accusing Hawking of arrogance. Allow me a humble defense of this incredible piece of work by someone who can easily be accounted as one of the most influential scientists of all time. While at parts it is written in the style of a scholarly lecture, ‘A Brief History of Time’ lights up at moments, when Mr. Hawking allows us a peek at his impish humor, inner motivations, theoretical goofs and scientific prejudices. If you read this book, you will notice that Hawking enlists many names, his students, other scientists who he thought contributed to his theories. He is not stingy with credit, and in this book itself, he has readily admitted his mistakes and writes a paragraph encouraging this practice (quoting Einstein). Science buffs yearn for such personal admissions from scientist-authors working at the frontier. It is only then can the scientific process, so often views as dry and pedantic, be rightfully perceived as a natural function of the human endeavor. Although this book was not intended to be an autobiography, it is still disappointing that Stephen Hawking keeps such revelations to a minimum. 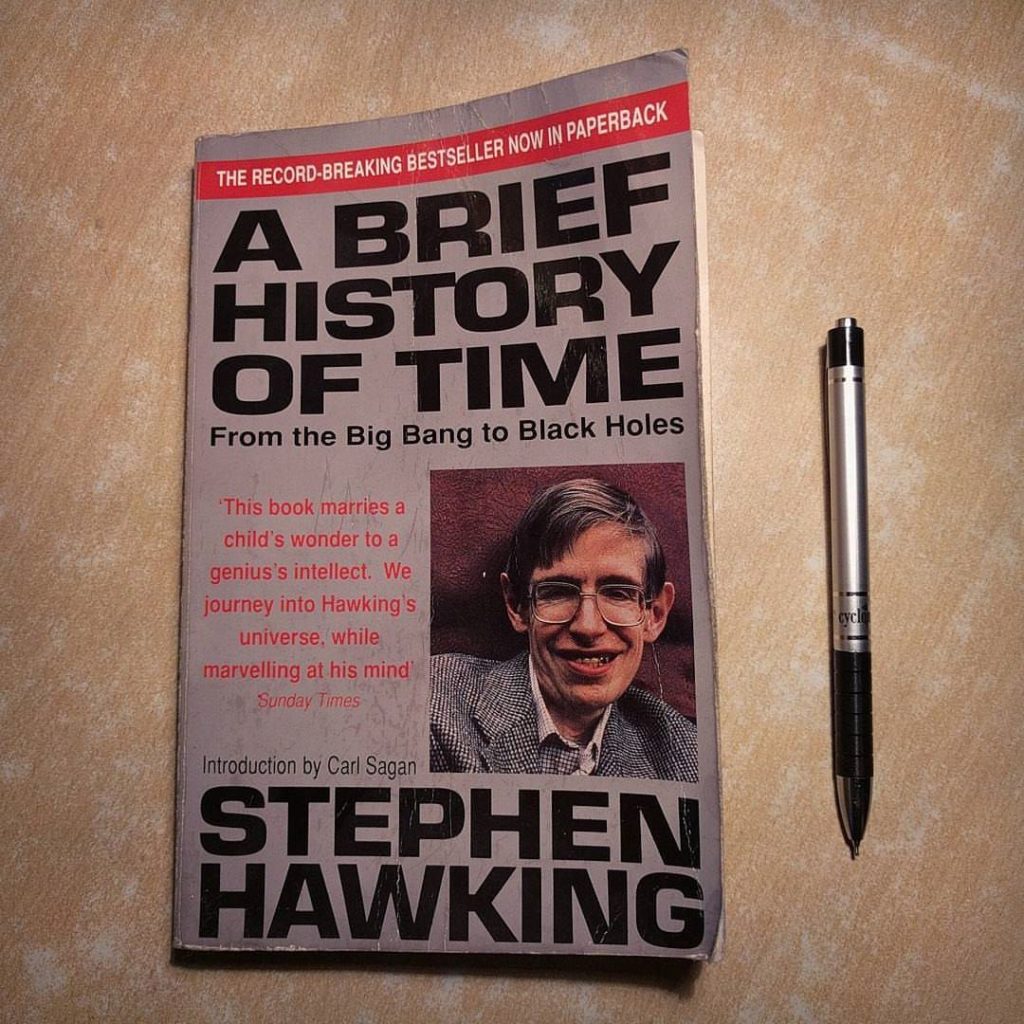 At the beginning of the book, the author sums up the situation competently by describing how the humankind has continued to evolve its thinking about the creation of the universe and slowly continues to wean away from the belief of a divine creator, and his hand in everyday events that we now understand better. He is humble enough to agree that at the end of the day, even after all these years of study, it is not possible to produce infallible theories. He readily admits the current limitations of physics and what he wishes it’ll be able to overcome in our lifetime. Every time, we observe an event that confirms a theory, the theory is strengthened. But the very second we observe a single event that disproves it, we have to move beyond it in search of a new theory. The best statement in the book probably is the one that talks about the validity of the various theories that have been mentioned. Some theories might be more universally established due to their ability to be confirmed through many observations. However, they are still theories, and there are several questions again about the creation of the universe that we have not been able to answer as yet including why and how the universe was born.

In applying the laws of quantum mechanics to the warped space surrounding black holes, Mr. Hawking discovered that black holes are probably evaporating by slowly emitting radiation. Given enough time, about a trillion years, stellar black holes, along with their singularities, would disappear! By the 1980’s, Mr. Hawking extended his studies to the greatest singularity of them all that expanded some 15 billion years ago to produce the universe as we know it. Considering how quantum mechanics dramatically altered the physics of the black hole, Mr. Hawking tells us how present abstractions of the big bang might be equally affected. In his precursory figuring’s, Mr. Hawking suspects that the embryonic universe did not expand from a singularity. Instead, he pictures a union of space and time that was finite yet boundless in the beginning. Now expanding, this four-dimensional bubble is fated to contract innumerable eons from now. Current astronomical observations do not support Mr. Hawking’s vision. Indeed, the author admits that his idea is merely a theoretical proposal at this point, even an aesthetic wish. “But if the universe is really completely self-contained, having no boundary or edge,” he muses, ”it would have neither beginning nor end: it would simply be. What place, then, for a creator?”

Some might feel uncomfortable at Mr. Hawking’s mention of a creator, a theme that resonates throughout the book. After all, science should explain the world around us without invoking divine interventions. Philosophically though, his question is a valid one. If science should truly develop a “theory of everything,” does the need for a supreme being vanish? To help solve this quandary, Mr. Hawking longs for the return of the philosopher-scientist.

“However, if we do discover a complete theory … it should in time be understandable in broad principle by everyone, not just a few scientists. Then we shall all, philosophers, scientists, and just ordinary people, be able to take part in the discussion of the question of why it is that we and the universe exist. If we find the answer to that, it would be the ultimate triumph of human reason – for then we would know the mind of God.”

What roles has modern science left for God in a universe such as we currently understand it? Hawking frequently muses about this and is somewhat entertaining. Does he refer to God as an actual being? Or the metaphorical unknowable from which he is snatching the secrets of the universe? Who really knows?

Stephen Hawking, as he says, has tried to find the nature of God. He does not disappoint the meta-physicist who is appeased by the idea of divine intervention. In numerous places, Hawking argues with himself whether God has created this universe, and how did he go about doing it? He also claimed that time was a property of the universe that God created, and that time did not exist before the beginning of the universe. But, if we can get comfortable with the idea of imaginary time, it could hold the answers of why we are here asking these questions and with some certainty what would have happened if this were not the case, which leaves God pretty much on the bench for a long, long time.

As a matter of pure luck or by divine fate, we, humans have landed in a place from where we can either look out at the cosmos and be humbled by its endlessness, or we can look in, deeper into the structure of which we are made of and be in awe of how the same elements can produce so much diversity from atoms to gigantic galaxies, and of course, us. Some people choose to look through the telescope, some through the microscope while a few sit back in their armchairs to observe the world as it unfolded. First came the armchair thinkers who brought with them many insightful ideas, some good and some bad. While a few were too uncomfortable with the idea of an ever-pervading omnipotent force, others, the ones whose views then appealed more to masses, readily accepted this concept. But when both coalesce into a person who strives to unify them into one cogent theory, we find one of a kind person – Stephen Hawking.

As an insignificant clump of stardust who has read this book, I feel a boom in my understanding of the universe. I think everyone as a citizen of this universe should read this book. It challenges how you think. I know for sure that I had ideas running through my head during/after reading this book. This book is what it says, as with all nonfiction books. ‘A Brief History of Time’ is a book I genuinely enjoyed. This work is a masterpiece. All hail the hawk!